Over half a million U.S. troops deployed since 2001 suffer from Post-Traumatic Stress Disorder (PTSD), but less than 20 percent will receive adequate care. Health care leaders and government officials are actively seeking more effective treatments. Now, a milestone has been reached to help those suffering the trauma of war. 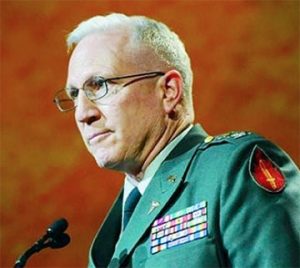 “This white paper can help us make a strong case for the use of the Transcendental Meditation® technique as a first-line treatment for PTSD,” says Colonel (Ret.) Brian Rees, M.D., Executive Director of TM for Veterans, which recently published a summary of research on the TM® program and PTSD with Operation Warrior Wellness, a division of the David Lynch FoundationSM. (Note: All page references in this article are to the 76-page white paper. A 13-page synopsis is also available to download and share.)

“The primary objective is to educate policy makers and those helping individuals with post-traumatic stress that TM provides a powerful treatment for PTS. This white paper is being shared with top government officials in Veterans Affairs and the Department of Defense, as well as with influencers in Congress,” notes Dr. Rees.

As one of the combat veterans quoted in the paper said, “I spent many years revisiting my near-death experiences and wondering why I had survived when a friend just a few feet away had not. That guilt, and the anger that accompanied it, haunted me for many years. TM has been the most effective tool I have found in dealing with this issue. I believe that it would be a useful tool for veterans young and old in dealing with the reality of post-combat life.”1

“This white paper is being shared with top government officials in Veterans Affairs and the Department of Defense, as well as with influencers in Congress.” —Col. (Ret.) Brian Rees, M.D., TM for Veterans

Since the 1980s, various studies have shown that the TM technique can alleviate PTSD symptoms. “But with the publication of the study on TM and PTSD in Lancet Psychiatry last fall as an anchor, we were in a position to gather all the research on TM and PTSD—14 studies to date—to show the promise that the TM technique has as a treatment for PTSD,” notes James Grant, Ed.D., editor of the white paper. The Lancet study was a randomized, controlled trial, funded by the Department of Defense for $2.4 million, which showed significant reductions in PTSD symptoms.2 (See the Enjoy TM News article about this important study.)

“The most important takeaway from the data is that the TM technique has a large effect in reducing PTSD symptoms,” explains Dr. Grant. “This fact, combined with the research showing that TM is also very helpful at treating the comorbidities of PTSD—such as depression and substance abuse—and the fact that TM works quickly and is relatively inexpensive, makes the TM technique a very attractive treatment for helping individuals with PTSD.” 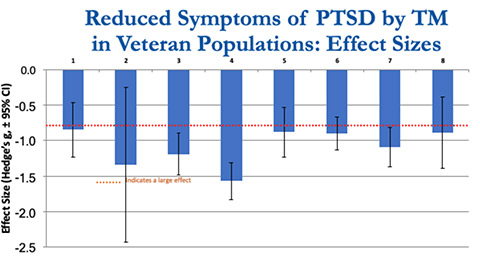 In scientific research, effectiveness of treatment is measured by effect size, and 0.8 or greater is generally considered to be a large effect. The average effect size across all studies on TM practice and PTSD in veterans is greater than 1.0 (pp. 7–9).

These large effect sizes are comparable to current first-line therapies for PTSD, which are widely accepted treatments based on clinical trials that show efficacy, safety, and tolerability. First-line therapies include the current gold standard for PTSD treatment, Prolonged Exposure (PE) therapy, and Cognitive Processing Therapy.

“Physically, my blood pressure has improved, my headaches have diminished, and the anxiety attacks have gone,” shared another veteran who practices the TM technique. “I have not had the chest pain I used to feel. Emotionally, I have not had any feelings of rage, or anger at insignificant trivialities. My whole emotional feelings are good. I feel like I am back to the person I used to be. People comment (at work) that I am nice, and my family has noticed I am not on edge, anxious, or grumpy. I feel lighthearted and take things into perspective rather than letting life’s negatives weigh me down.”

“Emotionally, I have not had any feelings of rage, or anger at insignificant trivialities. My whole emotional feelings are good. I feel like I am back to the person I used to be.” —A veteran who practices TM

The TM Technique Works Quickly and Is Acceptable to Veterans

In Prolonged Exposure therapy, veterans re-experience their trauma. This can be an effective but also emotionally and psychologically painful process. Trauma-focused therapies over time can have significant effects on reducing PTSD symptoms. 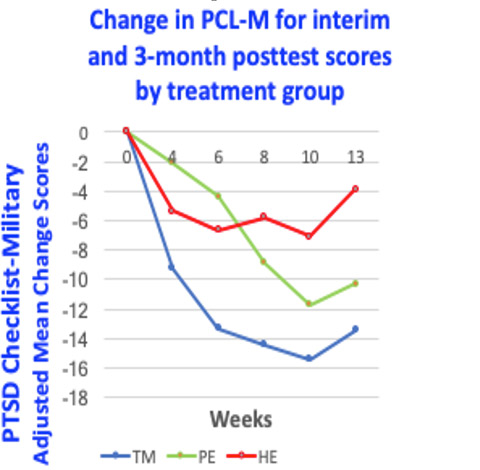 Comparison of reductions in PTSD symptoms as measured by interim and 3-month test scores for the TM technique, Prolonged Exposure (PE) therapy, and Health Education (HE)2

In the study published in The Lancet Psychiatry, Sanford Nidich, Ed.D., and his colleagues found that reduction in PTSD, as measured by the PTSD Check List–Military, occurred more quickly with TM practice than with Prolonged Exposure.2

The TM technique has also been shown to be acceptable to veterans. More than 4,000 veterans, active-duty personnel, and cadets have learned TM over the past decade. Research has shown that adherence to TM practice is at least equivalent to other treatment programs.3

Veterans have also learned the technique through TM Centers around the country, with excellent results.

The TM technique is widely practiced in corporate and educational settings as a tool for enhancing performance, so it does not have the stigma that may be associated with psychotherapeutic treatments (pp. 27–29).

And TM practice is safe. The published research on the TM technique and PTSD has not found any adverse events related to treatment (p. 28).

“The experience and opportunity of training and consistently meditating has been life-changing,” said a veteran quoted in the white paper. “Our household is calmer, quieter, and happier, and we will always be grateful for the scholarship for one of the best treatments we have ever found for PTSD.”

The TM technique has also been shown to be acceptable to veterans. More than 4,000 veterans, active-duty personnel, and cadets have learned TM over the past decade.

“The white paper also shows the effectiveness of TM practice in treating the comorbidities associated with PTSD—depression, anxiety, insomnia, substance abuse, and hypertension. This is very significant, because these have a large impact on cost of treatment and, in the case of depression, the likelihood of suicide,” Dr. Grant explains. 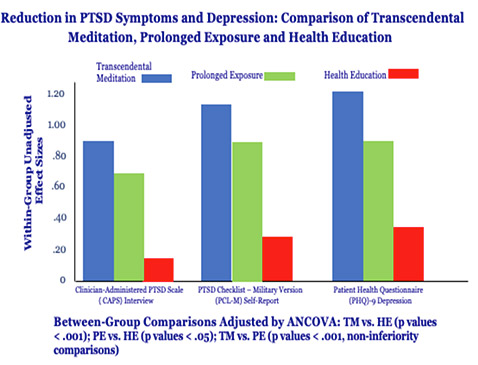 Comparison of the TM technique, Prolonged Exposure (PE), and Health Education (HE) on PTSD and depression (p. 10)

“These comorbidities compound the effects of PTSD, leading to greater disability, greater cost, and greater suffering,” states the white paper. “A large body of research, including with military populations, has demonstrated the effectiveness of the TM technique in treating these conditions, which strengthens the justification for including TM as a first-line treatment for PTSD” (p. 21).

There are potential healthcare cost savings from introducing TM practice as a treatment approach for PTSD, as a result of improvement in both PTSD and comorbid conditions. Prior research in the general population has demonstrated significant reductions in healthcare costs associated with TM practice (pp. 31–35).

A veteran who practices the TM technique put it simply: “All of my physical issues either cleared up or became much less,” he said, listing hypertension, headaches, high blood pressure, insomnia, anxiety, PTSD, back pain, and alcoholism. “I could cope with the problems much better, and my temperament has gotten better. My wife saw a change in me from the first evening. I can honestly say that, without any doubt, TM saved my life, my marriage, and now it has saved my wife’s life also. My only wish is that I want to spread this and help as many vets as I can.”

“I can honestly say that, without any doubt, TM saved my life, my marriage, and now it has saved my wife’s life also. My only wish is that I want to spread this and help as many vets as I can.” —A veteran who practices TM

TM in Comparison to Mindfulness

The TM technique and mindfulness approaches involve different practices and have different physiological effects. (See “How Does TM Differ from Mindfulness?” by David Orme-Johnson, Ph.D.) Mindfulness-Based Stress Reduction (MBSR) is the mindfulness program with the most studies on PTSD symptoms and thus most open to comparison with TM practice. 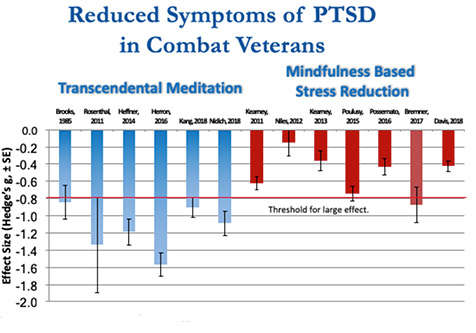 Within-group effect sizes for the Transcendental Meditation technique and Mindfulness-Based Stress Reduction (MBSR). The total effect for TM on PTSD reduction was large (g = –1.14) and for MBSR  was moderate (g = –.51) (pp. 23–25)

An analysis comparing the six peer-reviewed TM studies on veterans with PTSD and seven studies on MBSR found that the total effect for MBSR on PTSD reduction was moderate (g = –.51), and for TM was large (g = –1.14) (pp. 23–25).

These findings are summarized in the chart, which compares the changes within each group from pretest to posttest, as measured by the PTSD Check List (PCL) for all published PTSD research on the TM technique and MBSR.

How You Can Help

“We need to spread the word that TM is a highly effective program for treating PTSD, and this summary is a powerful way to do this,” says Dr. Rees. “Meditators around the country can share this white paper with people and organizations that are helping people with PTSD.”

Share this article and TMforVeterans.org with your friends and family. It may be just what someone needs to see. 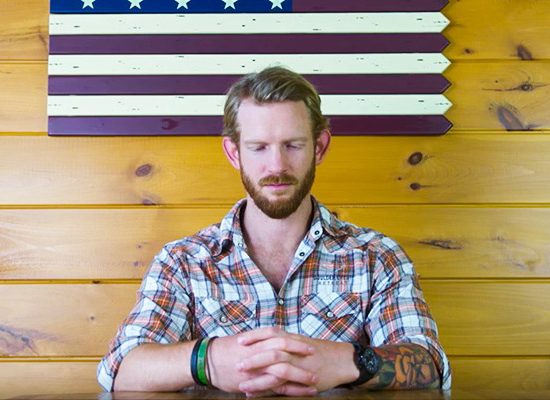 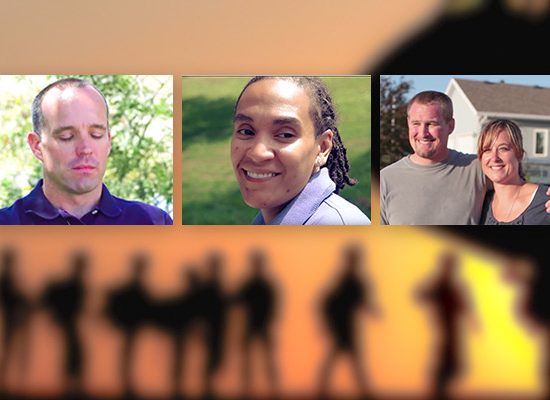 For veterans from Vietnam to Afghanistan, 80 percent dropped below the PTSD threshold after just 30 days of TM practice, according to a new pilot study published in Military Medicine. 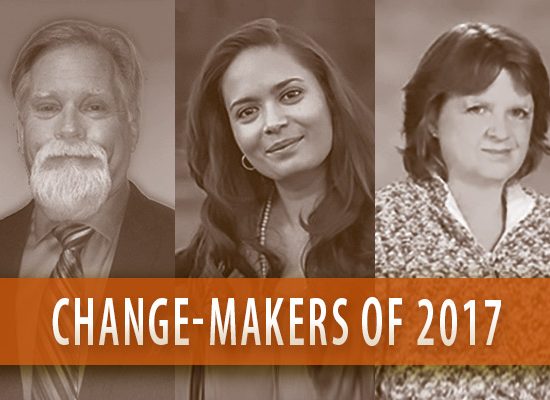