Bing Thom is an award-winning architect and recipient of Canada’s celebrated Golden Jubilee Medal, honoring Canadians who made a significant contribution to the nation. In 2010, Bing Thom Architects received the highly coveted Architectural Firm of the Year award by the Royal Architectural Institute of Canada. In 2011, he received the RAIC Gold Medal, the highest honor awarded for the profession of architecture in Canada. 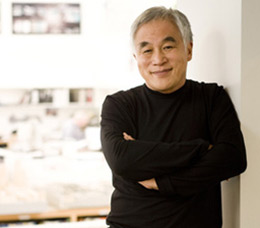 Bing Thom: Architecture is interesting in that it deals with a specific situation, and yet it tends to last a long time. So you need the ability to grasp the present and yet find a universal truth that will last a long time.

That’s why TM is so important to me. It is specific to the moment that you’re practicing meditation, and yet it is a tradition that’s gone on for thousands of years. And every time you meditate, you feel a little different than the last time, right?

Architecture is a subjective art where you have to go within to search for the inspiration that comes from inside. It’s also a science because you’re dealing with the physical world, and things have to stand up and take structural loads. So this combination of the subjective world and the objective world is very much like meditation, where you come into yourself, and then you come out into action.

I can’t separate architecture from meditation. To me, it’s all just Being, you know? Just the way I am.

“I couldn’t do what I do without meditation. It really anchors my life. I do it every day, twice a day. I think in forty or fifty years I may have missed it less than five or six times.” —Bing Thom, architect

Rolf: When I look at photos of the buildings you’ve designed, I see an interesting combination of openness and movement.

Bing: Oh, yes. The openness is breathing in, breathing out. My architecture is very much influenced by my meditation. I don’t think about it. I just do it. It becomes second nature.

Certainly there’s something exciting about the buildings. The movement has some vitality to it, and yet it’s never threatening. People always say, “Oh, your buildings are so calm and comfortable.” I say, “Well, that’s meditation.”

Rolf: They look very alive, and each one has its own unique personality.

Bing: I draw my inspiration from the specificity of the site, but at the same time, I try to search for the universality. I have to deal with the location, the climate, the culture, the street. It’s all-encompassing. 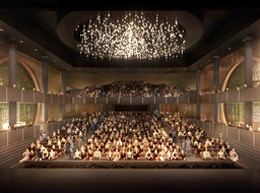 Bing: Yes, it’s an opera house. There was an international competition. They started with some 70 companies, narrowed it down to five, had each of us do a design, and ours was chosen. It’s a great honor to be asked to do this because it’s probably the first contemporary Chinese opera house to be designed in the past two or three hundred years.

Rolf: Considering location, climate, and culture, how did China inform your design?

Bing: Chinese opera is an art form that’s two or three thousand years old. It includes dancing, acting, singing, acrobatics, all by one person. It’s very performer-centered. So you have to be a very holistic person to be able to hold the audience. In that sense it’s very much like meditation, where you’re it. You are the show. (laughs)

So the building has to evoke a tradition that’s two or three thousand years old, and yet it also needs a sense about it that looks to the future. This building is at the entrance to what is right now the world’s largest cultural development. It’s the first of 17 buildings and a gateway that all the people coming to this cultural center will pass through. So it has to set the right tone and give the right message.

Rolf: How did you decide to become an architect?

Bing: I was drawn to become an architect when I was about seven or eight years old. My uncle was an engineer and took me into his office, and I saw these wonderful blue sheets with white lines on them. They were blueprints. I just got fascinated and said, “That’s what I want to do.” He said, “Well, then you want to be an architect.”

“I was so impressed at the way Maharishi dealt with this room full of very aggressive people that I thought, ‘Wow, if he can do that, that’s what I want to learn!’ ” —Bing Thom, architect

Rolf: When did you learn the Transcendental Meditation technique?

Bing: When I graduated from college, I got a job with a lot of responsibility that was very high-stress. At that young age, twenty-something, you think you’re Superman, but I was rapidly working my way towards probably a nervous breakdown.

Then there was an article in the newspaper about The Beatles learning TM, and that caught my attention. Some time later, Maharishi came to Toronto to give a talk, and I went with my wife. Now this was during the mid-60s, and the room was full of existentialists.

After the lecture they were firing these really aggressive questions at Maharishi. He just took all their questions and calmly answered them.

I was so impressed at the way Maharishi dealt with this room full of very aggressive people that I thought, “Wow, if he can do that, that’s what I want to learn!” We signed up for instruction a couple of days later and were taught by the teachers in Toronto.

I couldn’t do what I do without meditation. It really anchors my life. I do it every day, twice a day. I think in forty or fifty years I may have missed it less than five or six times.

Rolf: That’s an inspiration for our readers to be regular with their own practice of meditation.

Bing: That’s right. It’s only good if you’re regular. It’s like watering a flower, you have to water it every day. We’re like that flower, we need to be nourished.

I think that everybody is searching for something very simple, some meaning to life and existence. TM gives you that because you get an immediate effect. You touch base with the essentials of life.

“Meditation is so much a part of my life now that I make it a health benefit for anybody in my office to learn TM. My office pays for half, they pay the other half. And so quite a few have learned.” —Bing Thom, architect 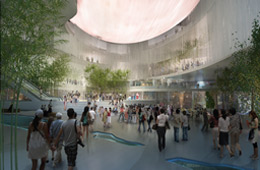 Rolf: I’m fascinated by the way your practice of meditation is interwoven with your life and your creativity, not compartmentalized.

Bing: Yes. That’s the problem with society today. People see it all as separated, and that’s why there’s so much unhappiness. We’re always searching for integration of meaning and for a more holistic value of existence.

Meditation is something that I wish more people would do. We certainly would have less problems in the world if everybody learned to meditate because they’d be more in tune with the greater values of what life is about.

Meditation is so much a part of my life now that I make it a health benefit for anybody in my office to learn TM. My office pays for half, they pay the other half. And so quite a few have learned. I think now about 25 percent of the people in the office are meditators. I hope more will come.

Rolf: Coming back to your art, for me your buildings create a sense of wonder.

Bing: There’s definitely a conversation between the creative forces and the person who has experienced the space. As you walk through a building, you’re having a conversation with the people who created the space. There’s an intention of the creation. Then there’s the effect of going through it, and the intention and the effect come together. That’s the dialogue that happens between the designer and the user.

Bing: Once you’re hooked, you can’t let go of it.