His Invention Saves Lives, Wildlife, and Millions of Acres in 115 Countries | 9:04

This summer, while Hurricanes Harvey, Irma, and Maria pummeled Texas, Florida, and the Caribbean, one of the worst wildfire seasons ever ravaged over 10 million acres across the western United States and Canada. Fortunately, an ingenious invention called the Bambi Bucket® is helping first-responders and the National Guard battle wildland fires from the sky. 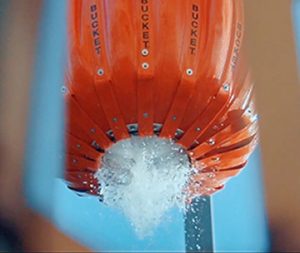 The lightweight, collapsible Bambi Bucket can carry up to 2,600 gallons of water for aerial firefighting and release it in a targeted column for maximum impact.

Aerial firefighters can drop the lightweight, collapsible Bambi Bucket from a helicopter, scoop up to 2,600 gallons of water from a lake, carry it to blazing forests, then target a powerful column of water where it is needed most, over and over again. This helps aerial responders contain wildfires in support of ground crews.

Recognizing the worldwide use of the Bambi Bucket to fight wildfires, the U.S. National Inventors Hall of Fame (NIHF) selected Canadian creator Don Arney as one of 15 inductees for 2017. He “epitomizes the spirit of an inventor,” said vice-president of selection Rini Paiva to the Vancouver Sun. Don credits his inventiveness to his daily access to inner silence through his practice of the Transcendental Meditation® technique and the TM-Sidhi® program.

The National Inventors Hall of Fame induction ceremony took place on May 4, 2017, in the majestic central hall of the National Building Museum, in Washington, D.C. This is where presidential inaugural balls are usually held.

The 2017 National Inventors Hall of Fame induction ceremony took place on May 4 in the majestic central hall of the National Building Museum, Washington, D.C.

The NIHF ceremony included a compelling video of Don Arney  telling how he invented the Bambi Bucket. From his beautiful home on Salt Spring Island in British Columbia, Don talks about mining the mind for ideas at deeper levels. (Video courtesy of the National Inventors Hall of Fame.)

Don has found that “meditating is a completely non-directed process, and inventing has to be the same.” He explains that “you know all of the things you’re going to be doing as you engage in the process, but you don’t direct it.” He finds that the answers come, and organize themselves, on a very profound level. “They bubble up, and very quickly and innocently the solution appears,” he says.

I’ve known Don Arney and his longtime SEI Industries business partner, Mark McCooey, since we were young meditators. I’ve seen him progress from a dreamy inventor to a very successful businessman and innovator, doing good for the planet. His uniquely creative solutions range from the world’s first inflatable pontoons for float planes to the leading technology in underwater lifting.

We have to look at innovation from the educational perspective: How do we actually enhance the creative process? We can do that now—it’s mainstream, and we just have to pursue it.  —Don Arney

During the NIHF ceremony, Don gave his acceptance speech after being officially inducted into the Inventors Hall of Fame. When I asked him for a copy, he told me, “I had a prepared speech and ditched it at the last minute and spoke off the cuff.” His spontaneous remarks about receiving “nuggets of information” and “kernels of innovation” as gifts were inspired. 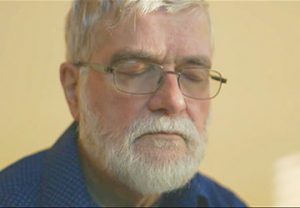 A Forbes article on the NIHF ceremony also highlighted this element of Don’s comments: “He said he owed his success to Transcendental Meditation, which he discovered after a spiritual journey that began when he found himself ‘sitting in the university library wondering if facts are all there is.’ He said TM has helped him understand that when it comes to invention, or any kind of creativity, ‘you don’t do it yourself. Those things are gifts that come to you.’”

Don also pays an emotional tribute to Mark, inviting him to stand and be recognized. Mark was able to transform Don’s invention into an iconic product sold around the world. Their U.S. patent commands over 90 percent of the international market.

Bambi Buckets, which come in a range of sizes and capacities, are now used in 115 countries. They were also used to cool Japan’s Fukushima nuclear site after the 2011 tsunami. The Bambi Bucket has saved forests, homes, and lives. These facts, plus the simplicity, effectiveness, and ubiquity of the product, are why the NIHF chose Don Arney. 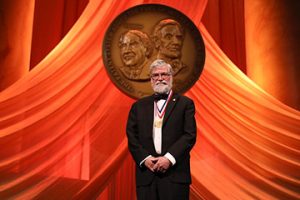 Don Arney, newly inducted into the 2017 National Inventors Hall of Fame, stands under the NIHF medal, displaying Edison and Lincoln

Don’s name will be forever illumined on the National Inventors Hall of Fame Board of Illumination. He takes his place alongside other great inventors who hold U.S. patents and have made a difference in our time and earlier eras. Many of the 547 inductees are historic figures, such as Thomas Edison, who were awarded posthumously. Don is one of about a hundred living inductees. He is also the 14th Canadian to be inducted into the NIHF.

At the time of this writing, there are 200 helicopters using the Bambi Bucket in British Columbia alone, dealing with over 200 forest fires. Like the western United States, Canada is in a state of emergency with these wildfires. Don’s invention is playing a key role in helping firefighters, and the TM technique played a key role for him.

Those of us who know and love Don and Mark are proud of them and their accomplishments. Their support of the TM organization in Canada is also very much appreciated. On behalf of the countless people and beloved lands that have benefited from the Bambi Bucket, we thank you. 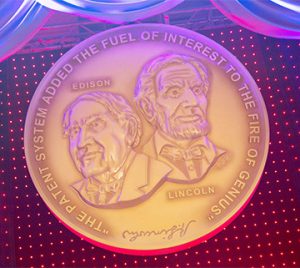 “The patent system added the fuel of interest to the fire of genius,” said Lincoln, the only president to hold a U.S. patent 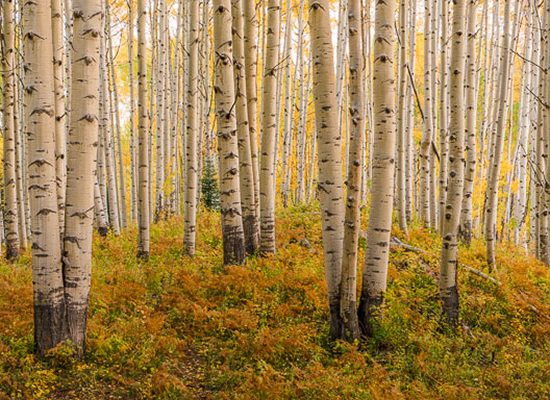 5 questions for landscape photographer Marty Hulsebos, who finds TM® to be "a stepping stone to timelessness."