In comic strips, a light bulb turning on inside a character’s head indicates a brilliant idea. For Dutch artist Jeroen Stok, a light bulb was the idea that set him on his career path as a sculptor and installation artist. Trained as a painter at the Royal Academy of the Arts at the Hague, he spent a year studying art and consciousness at Maharishi University of Management in Fairfield, Iowa.

“My dorm room had only one overhead light, and I needed a desk lamp,” Stok remembers with a laugh. “I took a yogurt cup, stuck a light bulb in it, and created a wooden base.” From there he started making lighting fixtures from tubes and other found materials that attached to the walls. “In the end, I exhibited them in a student show of about 30 lighted wall pieces,” he remembers. “The painting I had studied became three-dimensional.”

Back in the Netherlands, he took a step further into the realm of sculpture. “The pieces that I’d designed for the wall suddenly were standing by themselves,” he says.

Fast forward 20 years, and Jeroen Stok, now 54, is a sculptor in demand, having created dozens of commissioned stainless steel sculptures for cities, villages, and universities—from Amsterdam to the California wine country. Using the medium of stainless steel, his designs evoke the beauty of nature, ranging from flowers to animals to the abstract, from one foot high to 20 feet, reaching to the sky. 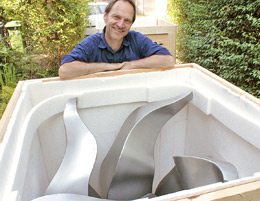 Jeroen Stok, Dutch artist and sculptor, with one of his stainless steel sculptures ready to be shipped (photo courtesy of the artist)

In his early, uncertain days as an artist, Stok’s sculptures were made of bamboo and paper. Stok recalls a friend advising him, “Why are you working with such unstable materials? You should work with something like steel.”

The idea resonated with Stok—his father owned a steel factory. Soon he learned how to weld and bend the steel to match the images in his mind. A quiet man with a willowy build, Stok says that while working with steel, he has imbibed some of its power and strength.

“In the art world I meet a lot of different people, and I can’t help but notice that artists tend to reflect the quality of the materials they work with,” he says. “People who work with wood are a little softer than people who work with steel. Working with copper can make you feel warm and solid.”

Finding the Story within the Art

Stok finds that his concepts usually take place around a story, and end up with many levels of meaning. “When I designed a sculpture for Vrije University in Amsterdam, it had a kind of feather shape. It wasn’t until I finished it that I realized that it was an abstract depiction of the wing of the gryphon—the logo for the university. Other people see it as a staircase, the academic ladder in which one scholar stands on the shoulders of the scholar before him or her.”

“When you start to design something it’s a process of silence; you’re in silence. There’s an effortless flow.” —Jeroen Stok

For Stok, who has been practicing the Transcendental Meditation technique since 1979, conceiving the design is the easy part. “When you start to design something, it’s a process of silence; you’re in silence,” he says. “There’s an effortless flow. That’s one side of the coin. The other side—you go into the realm of realizing the art, making it physical, and that is hard labor. You have to bend the steel to your will.”

Learning to “Go with the Flow”

While stainless steel is a rigid medium, in his own life Stok is known for “going with the flow.” He credits his flexibility to practicing the Transcendental Meditation technique.

As an installation artist working with government and civic committees, Stok has to create a design that will satisfy the disparate desires of the committee members, become a symbol of the organization or city, and appeal to the public for generations to come.

This requires a certain understanding of psychology, he says. “You have to first identify who the gatekeeper is, the one who is making the decisions, and then figure out what he wants, what is of interest to him.” 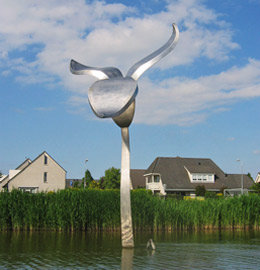 Understanding the Motivations of Others

For instance, in creating the three-story steel tulip design for the Netherlands township of Avenhorn, Stok realized that it was the mayor who was driving the project in the last months of his term.

He had the insight that the mayor wanted, above all, to leave a lasting legacy and, therefore, would give him greater creative and monetary in designing the project.

“When you meditate, you have a clearer view of what someone is really wanting or meaning,” he says. “Often people have hidden agendas.”

After the committee approves the design and budget, craftsmen cut, weld, and shape the raw steel into a refined sculpture. This stage also involves working with craftsmen who may have never fashioned steel into something this complicated before. Stok takes care to meet the workers and their families in their homes, and further motivates and befriends them by posting pictures of the project’s progress on a website.

“Sometimes their families never see the work that they create in the factory, so when they see the sculpture developing on the website, it becomes something they can share, a source of pride for the craftsman,” says Stok.

“When you meditate you have less of a tendency to give way to your negative emotions.” —Jeroen Stok

In the many months it takes to realize the massive sculpture, there is a point where the workers get frustrated and tempers flare. “When you meditate you have less of a tendency to give way to your negative emotions,” he says. “And you can clearly see when someone else is in the grip of negative emotions. You realize that he is not himself at the moment, so you can stay calm and wait until that ends. Then you can talk again.”

Art as a Reflection of Self

Despite working with others to create public works for generations to come, in the end, Stok’s art is deeply personal.

“Practicing TM is not only good for my art, it’s good for me,” he says. “I don’t really see my art as separate from my personal life.”

“Practicing TM is not only good for my art, it’s good for me. I don’t really see my art as separate from my personal life.” —Jeroen Stok 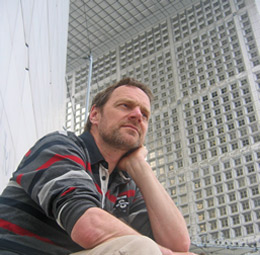 Touching the Hearts of Others

As an example, Stok and his wife were expecting their son when he designed the Avenhorn tulip sculpture. “It was about the blossoming of life,” he says.

Today, their son is ten years old and loves to climb on the public sculptures that his father has created in town centers, gardens, and malls.

Living in Lelystad, a village in the Netherlands created for people who live together and practice Transcendental Meditation and the advanced TM-Sidhi program in a central meditation hall, the Stoks find that meditation also helps them to lead a more balanced family life.

In recent years, Stok has received commissions from the U.S., such as two giant steel tulips for the city of Temecula, CA. They were looking for a tulip for their Duck Pond and Veterans Memorial park and found his work on the Internet. Stok attended the unveiling ceremony last September.

In addition to his commissioned sculptures, Stok has also directed a considerable amount of his artistic talent to create better living conditions for handicapped people, and to urban developmental planning.

“Art is a way of giving,” he says. “It’s not about glorifying your ego. It’s a way to touch the hearts of people, to create a good feeling, to make people happy.” 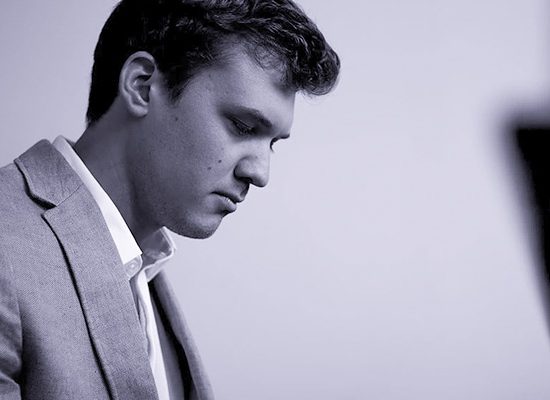 How the TM technique has helped three young artists expand their creativity and launch their careers.