Sarina Grosswald, Ed.D., was a leading researcher and educator in using the Transcendental Meditation technique to bring relief to those with PTSD and ADHD. She was an Advisory Board Member for the David Lynch Foundation (DLF) and Director of Research for DLF’s Operation Warrior Wellness.

Rolf Erickson: How did you get started creating Continuing Medical Education programs on the benefits of TM?

Dr. Grosswald: My background is in medical education, which includes developing Continuing Medical Education (CME) programs for physicians. I wondered, “Why aren’t physicians recommending TM to their patients, at least for hypertension?” I realized that they need to get information on the benefits of TM the same way they get any other new information, and that’s through CME.

Research is published in scientific journals, but a very small percentage of physicians read all the articles in those journals. Getting the research published is great, but it doesn’t reach the physicians in a broad way unless it gets picked up by the media. 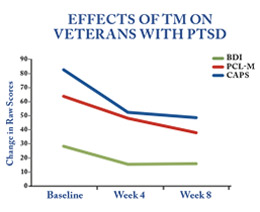 So I began developing online CME programs for physicians related to the benefits of TM for health. The first program I developed was on TM and hypertension, and the second addressed Post-Traumatic Stress Disorder.

Rolf Erickson: How would you define post-traumatic stress?

Dr. Grosswald: Post-traumatic stress occurs when someone has a life experience which causes such an extreme stress response that it significantly changes their brain. You don’t necessarily know what will cause trauma for any one individual. What’s traumatic for one person may not be for another.

Certainly war is a traumatic experience, but there are other events in people’s lives that can be equally distressing. Through the media we’re subjected to traumatic events happening around the world, including violence, accidents, and natural disasters. Many people are coming to learn TM these days due to traumatic experiences that are not at all war-related.

Rolf Erickson: When did you first become aware of post-traumatic stress in veterans?

Dr. Grosswald: In 2002, the U.S. sent in troops into Afghanistan, and a year later the first troops came back to Fort Bragg in North Carolina. I read an article buried somewhere in the paper that a couple of the veterans had battered their wives when they got back from the war.

Since I had already written Continuing Medical Education programs on domestic violence and PTSD, I recognized right away what was going on. That’s when I started working on putting together a CME program on TM and PTSD.

In 2007 I started making presentations on TM to members of the military. But people at higher levels were not willing to risk their career on bringing in TM. They wanted to see research specifically on veterans who had served in Iraq. So I talked to Norm Rosenthal, and together we did the first research on TM and Iraq veterans. The other authors of the study were Dr. Josh Rosenthal and Dr. Richard Ross, who is a physician at the Veterans Administration.

“It’s inner peace that gives us the resilience to manage the ups and downs of life. That’s why we recommend the TM technique for those with PTSD—to help restore their connection to that field of stability and silence within.” —Sarina Grosswald, Ed.D.

Rolf Erickson: How did you make the connection between PTSD and loss of inner peace?

Dr. Grosswald: I read a story about a man who ended up taking other people’s lives. Before he became violent, he’d said that he had lost his inner peace. This is a common thread among those who are diagnosed with PTSD. They’ve lost their inner peace, that internal anchor that allows them to float like a buoy on the surface of the wild ocean and not be pulled under.

It’s inner peace that gives us the resilience to manage the ups and downs of life. That’s why we recommend the TM technique for those with PTSD—to help restore their connection to that field of stability and silence within.

Rolf Erickson: Is it a similar situation for children with ADHD?

Dr. Grosswald: It’s a little different with ADHD. The stress is there, but these kids have never even been given the opportunity to connect with inner peace. With ADHD, it’s basically almost all a stress response.

Where does the stress come from? It can come from divorced parents or family turmoil. But there are other factors known to increase the effect of stress on the child’s physiology, such as premature birth, low birth weight, or the mother’s level of stress before and during pregnancy.

So the child comes into life already ratcheted up. These kids are born with their nervous system at a higher stress level. They never really had the opportunity to experience inner peace, because they have had that adrenaline response level from an early age.

“TM gives [children with ADHD] the ability to connect to their inner silence. Even at the age of 11 or 12, that experience of inner peace is really profound, because this is an experience they’ve never had before.” —Sarina Grosswald, Ed.D.

Rolf Erickson: When did you begin to focus on TM and ADHD?

Dr. Grosswald: When the diagnosis of ADHD was starting to become much more common, and many parents were putting their children on drugs for ADHD, I had the thought that TM could help these kids.

I connected with neuropsychologist Bill Stixrud, and we did a study on TM and ADHD. Our research found a 50 percent reduction in stress, which is a huge effect at a statistically significant level. That’s when I started talking about ADHD as being stress-related. This was a new concept at the time.

Over the next few years, a similar theme started to emerge in other studies. It was found that premature birth increased the risk of ADHD by 50 percent. Low birth weight increased the risk by 70 to 90 percent. This research began to give credence to the idea that ADHD was in fact stress-related.

In the past few months I’ve started seeing articles by people other than me that ask the question, “Is ADHD stress-related?” So now it’s becoming more broadly accepted that ADHD actually is stress-related.

Rolf Erickson: How do children with ADHD respond when they learn the TM technique?

Dr. Grosswald: TM gives them the ability to connect to their inner silence. Even at the age of 11 or 12, that experience of inner peace is really profound, because this is an experience they’ve never had before. They’ve never had a reliable way for their mind to settle down and become quiet.

We have a TM project for children with Autism and Asperger’s who have had serious problems. Their parents are noticing changes in them. It’s amazing how self-aware these kids are. You may think that they have no clue, but they really do know what’s going on. And they can articulate beautifully the positive changes that they experience after learning TM.