The Ultimate Reality That Unites Us All | 4:36

In a world often polarized by differences of culture, color, and creed, the need for understanding the core unity of life is more urgent than ever.

“It is absolutely essential that we bring to the fore the fundamental unity of humanity. It is a scientific truth, in this scientific age, that we are fundamentally one at our core,” began renowned quantum physicist, educator, and leading proponent of peace, Dr. John Hagelin. His keynote address at Loyola Marymount University on October 7 culminated a two-day national health summit. 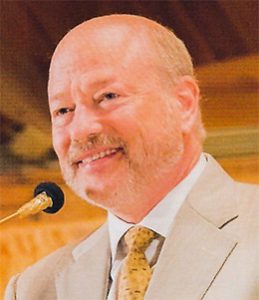 Dr. Hagelin gave this talk as the 2017 winner of the prestigious Doshi Family Bridgebuilder Award, for his pioneering work forging the deep connections between modern science and the ancient Vedic sciences of Ayurveda and Yoga.

The annual award, founded by Navin and Pratima Doshi, honors individuals and organizations fostering understanding between cultures, peoples, and disciplines.

It’s no wonder they chose Dr. Hagelin. His groundbreaking research at CERN (the European Center for Particle Physics) and the Stanford Linear Accelerator Center, and his development of a successful Grand Unified Field Theory based on the superstring, are highly regarded.

Dr. Hagelin, president of Maharishi University of Management (MUM.edu) and of the Global Union of Scientists for Peace (GUSP.org), has also been at the forefront of the scientific investigation into human consciousness, the effects of the Transcendental Meditation® (TM®) technique on brain development, and the use of collective meditation to defuse societal stress and promote peace.

“I am dedicated to fulfilling this mission of building bridges among cultures,” he said. “One piece of this bridge-building that I will ambitiously try to present today is uniting the cutting edge of fundamental particle physics and Unified Field Theory with Ayurveda and Yoga—with the ancient Vedic wisdom.”

“It is absolutely essential that we bring to the fore the fundamental unity of humanity. It is a scientific truth, in this scientific age, that we are fundamentally one at our core.”  —Dr. John Hagelin

The physics of the 21st century “is focused on the Unified Field—on complete unification—and fulfilling Einstein’s lifelong dream to understand the fundamental unity of life, the source of the universe, and the origin of all the laws that govern it,” said Dr. Hagelin.

To introduce us to this Unified Field, he dives through the “onion layers” of reality—from the familiar, macroscopic world of the senses, through the “perplexing world” of atomic quantum mechanics, to the million-times-smaller world of nuclear and sub-nuclear particles, to the Unified Field itself.

String theory, to which Dr. Hagelin has contributed, is the most complete and powerful mathematical theory of the origin and nature of the universe. Fortunately for non-physicists, he presented the theory in words, not math:

“There is a universal, unbounded ocean of pure existence, pure being, of infinite silence, of non-change, that is eternal—it was there before the universe emerged, and it will be there when this universe ceases to be,” explained Dr. Hagelin.

“And although it is deeply silent at its depth, the surface of this ocean is brimming with dynamic activity—a result of the quantum uncertainty principle—where it is continuously erupting in a sea of effervescent foam, like ginger ale effervesces bubbles,” he said. 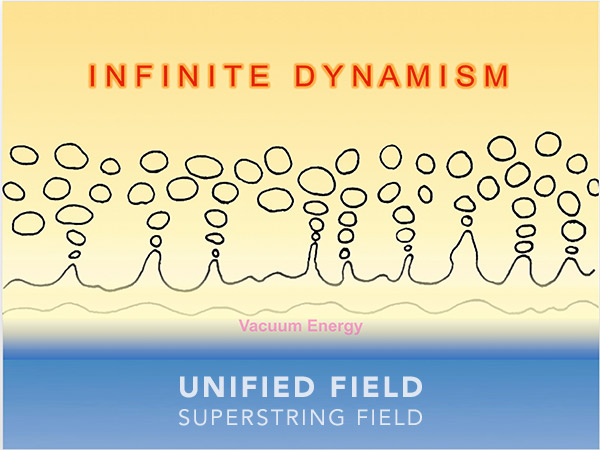 These “bubbles” take “the mathematical form of tiny loops called superstrings, elastic loops—think rubber bands,” he said. What is the significance of rubber bands as opposed to fundamental particles? They wiggle.

“And since these rubber bands happen to live in 10 space-time dimensions, there’s a lot of wiggle room in which they can vibrate,” Dr. Hagelin said, to the delight of the audience.

Vibrations mean energy, and as Einstein explained, E = mc2. These vibrating strings, with their different vibrational energies, have different masses, and these different masses match with—and thereby explain—the great diversity of the elementary particles we observe in nature. “This is the miracle of string theory,” he said, which very naturally explains all the fundamental particles and forces of nature. He continued:

“There is a universal, unbounded ocean of pure existence, pure being, of infinite silence, of non-change, that is eternal—it was there before the universe emerged, and it will be there when this universe ceases to be.”
—Dr. John Hagelin

The Deep Identity of Unified Field Theory and Ayurveda

Dr. Hagelin brilliantly articulated how this vibrating, universal intelligence first manifests into physical creation as three fundamental superfields. These in turn emerge as the five spin-types or building blocks of nature. 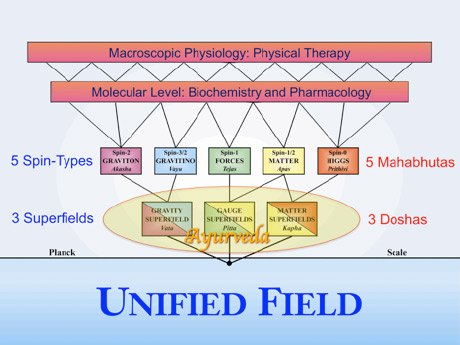 These fundamental laws of nature correspond exactly with the principles of Ayurveda, “which deals with human physiology at its deepest core,” Dr. Hagelin continued. The three superfields correspond to the three prakritis (subtlest essences) of Ayurveda: Vata (space/air), Pitta (fire/water), and Kapha (water/earth). And these three prakritis further differentiate into the five elements—space (akasha), air (vayu), fire (tejas), water (apas), and earth (prithivi), which correspond precisely to the five spin-types.

“This looks like a nice numerical coincidence, but it’s not. It’s a very, very deep identity,” emphasized Dr. Hagelin. “Ultimately, Ayurveda extends all the way to the Unified Field, the Atma, the true Self or universal Self—which is what Yoga is fundamentally for.”

“Ultimately, Ayurveda extends all the way to the Unified Field, the Atma, the true Self or universal Self—which is what Yoga is fundamentally for.” —Dr. John Hagelin

What Is Yoga? Human Consciousness and the Unified Field

In the second half of his talk, Dr. Hagelin identified “pure consciousness, Atma, infinitely expanded human awareness, as the direct experience of universal consciousness, the Unified Field.”

He demonstrated this absolute identity by investigating the numerical, quantitative structure of the Unified Field. Along the way he elucidated the mysterious process of “space-time compactification,” to explain how the 10 space-time dimensions of string theory “roll up” into the 4-D world in which we live. 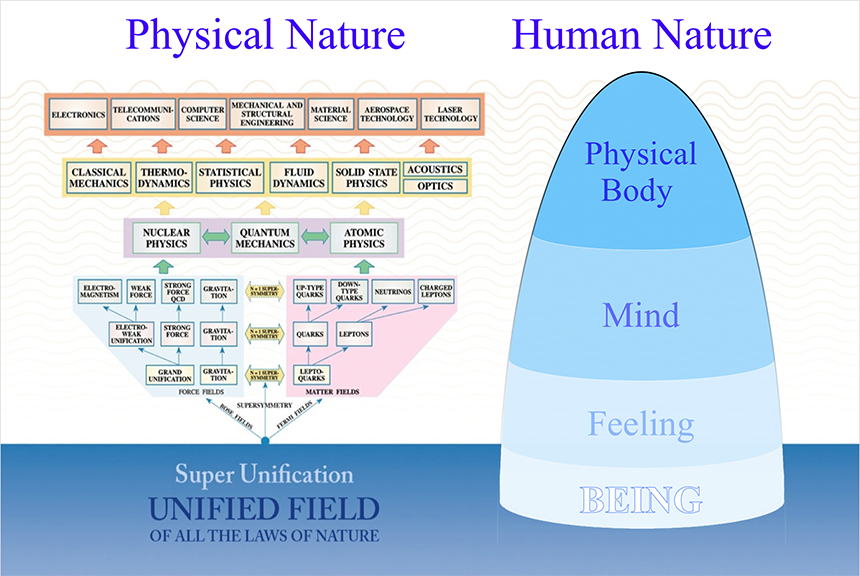 So what then is Yoga? “Yoga is a practice for fathoming the depth of consciousness,” and experiencing inner unity, said Dr. Hagelin. He quoted the ancient Yoga Sutras: “Yoga is the complete settling of the activity of the mind. Then the seer is established in the Self.” This is the Unified Field.

Dr. Hagelin concluded his talk by introducing the powerful, far-reaching effects of directly experiencing the Unified Field through the TM technique—from improving health and brain functioning to increasing intelligence and creativity, from developing higher states of consciousness to reducing social stress and helping create peace in the world.

“In the vicinity of Yoga, hostile tendencies shall be eliminated,” Dr. Hagelin quoted from the Yoga Sutras.

Twenty-first century Unified Field Theories based on the superstring are fulfilling Einstein’s lifelong quest to understand the fundamental unity of life. Dr. Hagelin’s “grand unification” of modern science with ancient Vedic wisdom reveals the possibility of an even more profound union: of our individual self with universal intelligence.

Dr. Hagelin’s “grand unification” of modern science with ancient Vedic wisdom reveals the possibility of an even more profound union: of our individual self with universal intelligence. 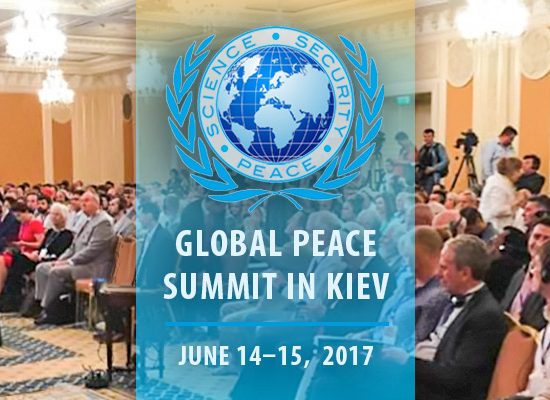